Associate Professor Ruth Peters from the University of New South Wales, speaks to Dr Sebastian Walsh, University of Cambridge, about the benefits of a population-level approach to dementia risk reduction.

Population-based studies, that track cohorts of people over time, suggest there are several risk factors and protective factors that could be modified, so that people have better brain health and less risk of developing dementia. These risk factors, such as low education, physical inactivity and obesity, smoking, excess alcohol, head injuries, hearing loss, and depression, are common in our societies.

We can all reduce our own risk of dementia by adopting healthy lifestyles, but we know this is hard to do – particularly for those from more deprived backgrounds. Changing things at a population-level (i.e. the societal conditions which make people more or less likely to make brain healthy choices) is key. Examples of this include taking actions like banning smoking in public places, requiring newly built roads to include cycle lanes, and reformulating food and drink products to be healthier.

These interventions (see table below) help everyone across a population, and do not require a lot of conscious effort on the part of individuals – this is called ‘the population-level approach’. Because this approach aims to reduce everyone’s risk by a small amount (rather than just targeting the small number of people at high-risk), the population-level approach is thought to be the best way to reach the most people and prevent as much dementia at a population-level as possible. Because it requires little conscious effort on the part of individuals, it is thought to be the most equitable approach – meaning that people benefit whether they are rich or poor (in fact because societal conditions are usually worst for the poor, and these approaches affect those conditions, they could even advantage deprived groups the most, and reduce health inequalities). 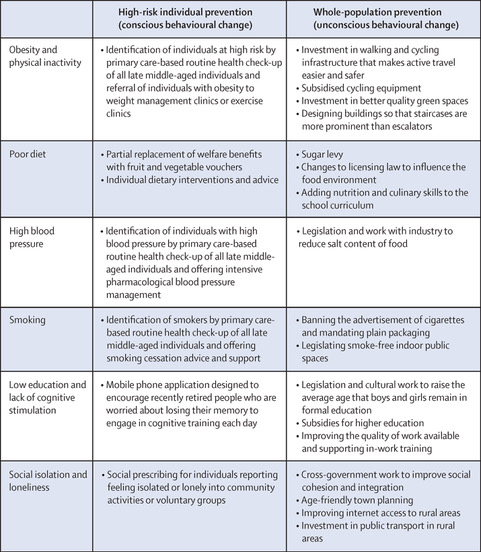 Examples of prevention interventions against dementia’s modifiable risk factors, under the individual-level and population-level approaches to prevention. Reproduced from Walsh et al., 2022, Lancet Healthy Longevity under CC BY 4.0.

Population-based approaches are particularly important now, because 6 in 10 people with dementia live in low- and middle- income countries, and this proportion is set to rise over coming decades. Approaches targeting individuals requires identification of those at ‘high-risk’, requiring data that may be expensive and unfeasible to collect. Whereas acting at the population-level allows policymakers to focus on deliverable interventions that improve the health and wellbeing of all sectors of society.

This research group aims to build the evidence for population-level approaches to dementia risk reduction. This evidence must be produced in a way that is relevant to policymakers, and in different world regions – in particular low-and middle-income countries, and resource-constrained populations within high-income countries. Therefore, we particular want to collaborate with researchers and policymakers from these settings.

Please click here for an evidence hub with more detailed information on this topic, including key references and publications.

Please click here for contact details of the research group, and to receive information about upcoming events and activities of this group.